Anabolic Steroid Use in Adolescents and High Schools 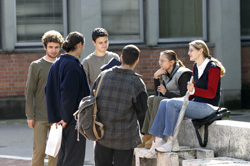 Anabolic androgenic steroids (AAS) are extremely powerful drugs.  “Anabolic” means to grow and “androgenic,” pertains to the development of male characteristics.  AAS are a synthetic version of the body’s naturally occurring hormone testosterone, the same chemical responsible for male sexual traits and the fundamental component in muscle development.  AAS are used medically to boost testosterone in males whose natural production is insufficient, to block or eliminate estrogen production in females with breast or reproductive cancers, to aid in anemia, and to preserve lean body tissue in patients with immune system and muscle wasting diseases.  Although AAS usage has the potential for negative side effects, they are often outweighed by the benefits patients receive when administered under a physician’s care.

Though most commonly seen in bodybuilding, AAS are also prevalent in non-bodybuilder circles when there is dissatisfaction with one’s physique, a desire to shed unwanted fat, or the need to gain additional muscle mass.  Jack is a member of a local health club and former football player at Virginia Tech who exclaims, “I wanted the body of a 25-year old pro athlete at eighteen years old.  What I didn’t understand was that at 18, I was still growing.”  A consistent steroid user throughout his high school and college careers, Jack was like many teenagers who seek chemical assistance in fulfilling social and athletic goals.  According to the Monitoring the Future Survey by The University of Michigan, in 2006, 2.7% of high school seniors reported they had tried steroids at least once in their lifetime.  The majority of those who fall victim to teenage steroid abuse are male athletes seeking to better their performance in sports, be more competitive in the pursuit of athletic scholarships, or to gain recognition outside of the arena.  Females as well as males have shockingly admitted trying steroids as early as age 11, and are said to most commonly do so for aesthetic purposes.  The charted and graphical illustrations below demonstrate some of the trends seen over the past several years.

Monitoring the Future Study: Trends in Prevalence of Various Drugs for 8th-Graders, 10th-Graders, and 12th-Graders 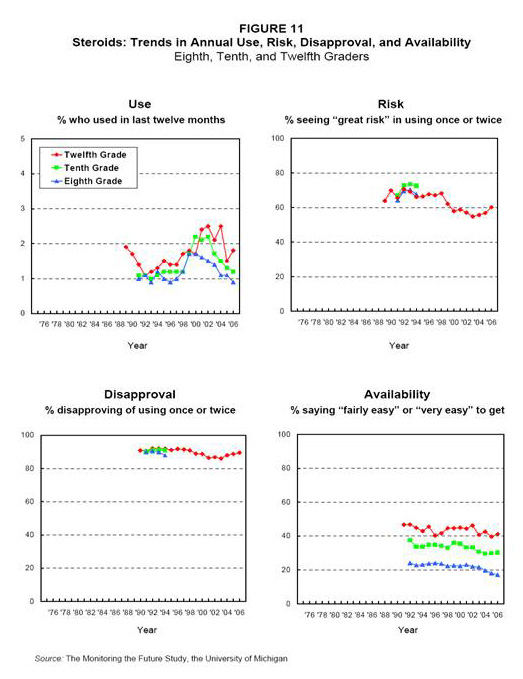 What teens in Jack’s situation don’t realize is that these drugs are potentially quite harmful.  Although some of the side effects are minor and temporary, adolescent use can increase both severity and permanence.  All too often teens simply ignore these signals. Jack, for example, admitted to tolerating his side effects in order to continue obtaining what he believed to be benefits.  But what types of problems are we speaking of when addressing the negative side of AAS?

The liver is a marvelous and multi-faceted organ.  One of its many duties is the routine elimination of toxins and metals from the body.  What most teens don’t know is that chronic AAS abuse can lead to serious liver diseases including the growth of tumors, malignant cancers, and formation of blood filled sac known as pelosis hepatitis.  Pelosis sacs can burst or rupture resulting in internal bleeding, a very serious and potentially fatal condition.  Oral steroids are harder for the liver to metabolize, and can easily throw it’s values out of balance by increasing low-density lipoprotein (LDL) and decreasing high-density lipoprotein (HDL).  Sadly, orals are preferred by teens for their convenience and stealth, making them particularly susceptible to the aforementioned conditions as well as a host of others.

Cardio Vascular Disease, also known as CVD, encompasses a wide range of complications including arteriosclerosis which causes deposits of fatty substances and cellular waste products to buildup on the inner lining of arterial walls.  The clogging and partial blockage of arteries can be fatal because of restricted blood flow to the heart and brain.  Such diseases are progressive, meaning they become worse as time passes, and if contracted in adolescence can potentially shorten a teen’s life expectancy.

The improper supplementation of male hormones (AAS) can cause decreases or cessation in the body’s natural hormone production causing both reversible and irreversible changes.  Some changes that can usually be reversed include reduced sperm production and testicular atrophy (shrinking of the testicles).  The following side effects have a greater tendency for permanence if the drug is not discontinued or unless some form of therapy is adopted.  Excessive testosterone can be converted to other hormones like DHT which lead to increased acne, male pattern baldness, and prostate enlargement.  It can also result in higher levels of the female hormone estrogen resulting in the abnormal growth of breast tissue, a condition known as gynecomastia.  This occurs when the body overdevelops glands beneath the nipples which start to resemble small female breasts.  “With prolonged use of a steroid, eventually the man will feel less sexual desire and will be less capable of maintaining an erection.  This is temporary and can be prevented with the use of a substance such as HCG,” says Dr. Beals, of Ball State University.  However, when the steroid is discontinued, the body’s natural level of testosterone will certainly be suppressed.

Some psychiatric symptoms include mood swings, increased aggression, irritability, depression, anger, sadness, anxiety, nervousness and fatigue.  Another very prominent symptom is the fear of losing gains, especially when maintenance principles aren’t fully understood or applied.  This very powerful component can easily mushroom into a lifetime of psychological addiction.  New research on animals conducted at Northeastern University suggests that steroid use in adolescents may permanently alter brain chemistry, whereas the mental effects on adult users typically subside following cessation of use (BBC News, August, 16, 2002).  Although this issue requires further research, the study provides support for it’s contention that introducing exogenous (outside) hormones to an underdeveloped endocrine system can potentially have permanent and immediate consequences.”  ("Anabolic Steroids and our Teens", Adapted from a chapter of the book "Legal Muscle: Anabolics in America", Rick Collins, J.D., 30 January 2007, http://www.dolfzine.com/page528.htm)

AAS can stunt the vertical growth of adolescent users.  Epiphyseal plates located on each end of the long bones remain open permitting growth to take place.  At the time of maturity these plates fuse, thus definitively ending the vertical growth process.  Too much additional testosterone in an adolescent user’s body can cause hormones to send false maturity messages resulting in the premature fusion of growth plates and reduction in overall height.

Teens most likely will not have the resources to obtain the proper paraphernalia for sterilely injecting steroids.  Poor injecting techniques can lead to bacterial infections under the skin such as abscesses, cellulitis, gangrene, and excessive the formation of scar tissue.  The hazardous practice of sharing needles can present a risk of transmitting AIDS, HIV and Hepatitis B or C. 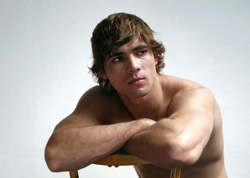 Abuse is different from addiction, and will always precede it in drug use.  This earlier incidence is why abuse is the more easily treatable and curable of the two.  Drug abuse begins when one has made the decision to use repeatedly, and if used too often drugs create associated physiological cravings within the body.  Another characteristic of drug use is that of hindered brain functioning.  Neurotransmitters are messengers within the brain that signal the rest of the body to feel and act.  Drug use literally alters brain chemistry to the extent that these messages cannot be properly relayed.  The continued disruption of these messages causes compulsive drug cravings, that if unaltered result in addiction.  Though not every user becomes an addict, this behavior is especially dangerous in adolescents whose young brains and bodies are still developing.  For this demographic permanent side effects are likely to occur.

According to CRHA's ‘Using Anabolic Steroids Safely, A Harm Reduction Approach’, addiction involves two basic things:  (1) Drug seeking behavior – taking large amounts of time finding, buying and then using steroids, and; (2) Dependence – The loss of the ability to stop using the drug, a period in which the body becomes so accustomed to the drug that it is required to function.  Some signs that a teenager may be addicted are:  a loss of control over the amount used, which is often much more than originally intended; preoccupation with steroid use and body image; continued use despite knowledge of risks and negative effects; the development of tolerance; a need for higher dosages to achieve prior effects; continued use as an avoidance of withdrawal symptoms; disruption normal daily activities; declining grades; and withdrawal from normal school and social functioning.

Sudden cessation of AAS use without some form of step down therapy can be dangerous and possibly result in physical withdrawal symptoms.  These are often seen when a parent or coach has found and confiscated the AAS and include cravings, fatigue, depression, restlessness, decreased appetite, insomnia, headaches and decreased interest in sex.

The federal government, various associations and committees have implemented specific measures in the prevention of adolescent steroid abuse.  The “Monitoring the Future Study” chart above depicts substantial decrease in the lifetime usage of 12th graders since 2003.  The Anabolic Steroid Prevention for Teen Athletes (ATLAS) is a program that provides male, high school athlete steroid users with peer counseling, factual information and healthy alternatives.  ATLAS received the ‘Model Program Award’ from the Center for Substance Abuse Prevention in 2000, and the ‘Exemplary Award from Safe and Drug Free Schools’ in 2001.  Surveys have reported a positive impact by ATLAS in the areas of drunk driving, illicit drug use.  Students who participate in the ATLAS program report higher self-esteem, better self-confidence, and greater awareness after completing the program.  In 1999 ‘Athletes Targeting Healthy Exercise and Nutrition Alternatives’ (ATHENA) was designed to reduce both the use of drugs and eating disorders in teenage girls.

"Anabolic Steroids and our Teens", Adapted from a chapter of the book "Legal Muscle: Anabolics in America", Rick Collins, J.D., 30 January 2007, http://www.dolfzine.com

“Cutting Teen Steroid Use,” Health A to Z, A World of Health at Your Fingertips, 30 January 2007, http:/www.healthatoz.com

"Teens at Risk for Stunted Growth,” NIDA for Teens, The Science Behind Drug Abuse, 30 January 2007, http://teens.drugabuse.gov

"Too Young to Pump Iron?" Health A to Z, A World of Health at Your Fingertips, 30 January 2007, http://www.healthatoz.com